Co-op Midcounties has been involved in Co-op Loan Fund ever since the fund was set up in 2002. It was not called Midcounties back then. The name was first used in 2005 following the merger of Oxford, Swindon & Gloucester Co-op with West Midlands Co-op. Both societies had been instrumental in the setting up of Co-op Loan Fund.

Co-op Midcounties can trace its roots back to 1853 when the Swindon Co-operative Society was established. Soon afterwards co-op societies were started in Gloucester, Walsall, Chipping Norton, Oxford and Cinderford. There were dozens of co-op societies in the west midlands by the end of the nineteenth century. Slowly these societies began to merge and by the end of the twentieth century there were only two: Oxford, Swindon & Gloucester Co-op and West Midlands Co-op. 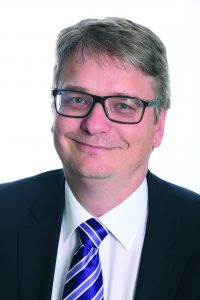 The society is owned by its 700,000 members, one of whom is Peter Dubois who is also an employee who has worked in various departments over the last 20 years. In 2016 he was appointed Chief Financial Officer and he is ultimately responsible for all financial and commercial decision-making throughout all the society’s operations.

Peter volunteered to join the board of Co-op Loan Fund in 2014 when the previous Midcounties representative stood down. He said: “It’s good to be involved in an organisation that is helping co-operative enterprises develop. We can provide credit lines that groups of people might not be able to access from the mainstream.”

In 2016 Peter was elected as chairperson of the board and it is a role he enjoys. He said: “I think the board is well balanced. It has people who are very grounded in co-ops, some who are very creative and some who are cautious. It’s good to have a clear structured approach to debate and decision-making and this is where I can help as the chairperson.

“I believe that the co-op sector will become increasingly important to the UK economy. During difficult economic times people go back to things they can trust, and they can trust co-ops. We are going to see a growth in co-ops and the role of Co-op Loan Fund will be essential.”