From victim to survivor – from tenant to landlord

One of the oldest organisations in Yorkshire that supports survivors of domestic abuse and sexual exploitation has bought a town centre office building thanks to the co-operation of several responsible finance organisations.

On 22 October Rotherham Rise completed the purchase of the Grade II listed building in Rotherham High Street that it already occupied together with other tenants. The building, which is to be renamed Rise House, provides 1,000 sq ft of office and retail space. Rotherham Rise uses about two-thirds of the accommodation and will now receive rent from the tenants of the other offices, thereby providing a new income stream. Rise is redeveloping the ground floor retail area as a cafe, which is scheduled to open by the end of November. 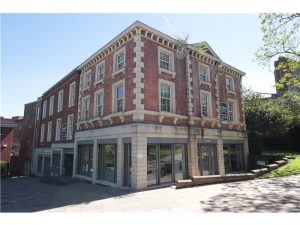 Sue Wynne, chief executive of Rotherham Rise, said: “The market for rented offices in Rotherham does not favour not-for-profit organisations like us. We have had to move premises several times in the last 10 years and it’s been expensive and disruptive. We have been wanting to buy somewhere for a while now so that our working environment is stable and sustainable.”

Rise had been planning to purchase a building and saw an opportunity at the High Street premises when they moved in as tenants at the end of 2018. They then started to look at options of how to achieve this. The purchase was made possible by Co-op Loan Fund, Co-operative & Community Finance and Key Fund collaborating on a package of long-term loans. The Co-op Foundation has provided grant and loan finance for the fitting out of the cafe.

As a result of the purchase and the new income from tenants and the cafe, Rise will be in a stronger financial position and it will not have to worry about moving premises again. This leaves the organisation free to concentrate on providing its comprehensive range of services that include refuge accommodation, support services, therapeutic services, pathway services, and training in domestic abuse awareness.

Rotherham Rise was established in 1976. Today it has 30 employees and is in the process of recruiting three project workers and it is also advertising for the voluntary post of treasurer.

Sue Wynne said: “Over the last 10 years there has been a very significant increase in the demand for our services. This is a good thing because it shows a greater awareness of domestic abuse and a willingness to report it. There has been a big leap in self-referrals. It’s been a challenge for us to keep pace with demand. Our main focus has been to ensure that people in need of our support don’t have to wait too long. Looking ahead, we are developing more pathways to our services that support people throughout the journey from victim to survivor.”

Ian Rothwell, investment manager of Co-operative & Community Finance, which manages Co-op Loan Fund, said: “It is great that we were able to help such a worthwhile organisation to secure its accommodation and improve its sustainability. This is also a good example of responsible finance organisations working together to provide appropriate lending that makes a big difference to those providing support to vulnerable people.”

Bristol Credit Union is celebrating 20 successful years of serving a growing community by embarking on an ambitious plan for further expansion and improvement.

Money-Go-Round, which later became Bristol Credit Union, was registered in 1999 by volunteers in east Bristol to offer services to people who did not have bank accounts and could not access affordable loans.

Following mergers with other credit unions, Bristol Credit Union now serves the whole of the former Avon county. With over 14,000 members, it claims to be the biggest in the south west region and one of the largest in the UK. It now hopes to triple in size over the next five years, thanks to loans and investment from Co-op Loan Fund, Bristol City Council and charitable foundations.

Chief executive James Berry says this will help increase its presence in local communities around Bristol, improve its online user experience and increase the number of affordable loans it can make.

Over the last 20 years, the credit union has provided over £30m of affordable loans, saving up to £17.4m in interest compared to alternative, often high-cost, lenders. And thousands of local people have developed a saving habit, collectively saving nearly £7.5m.

James Berry said: “It’s amazing to see how far we’ve come over the last 20 years by focusing on serving our members and local communities instead of maximising profit at all costs. Some of the first volunteers are still around today, and I’m so pleased for them that their efforts have produced such a great local success story.

“With nearly 700 local businesses, community groups and co-operatives as members, we’re now able to put even more back into our local area and do more good stuff like helping over 1,200 children save in their schools with our Money Munchers saving club.

“With our ambitious but realistic plans for growth – which our investors have shown their confidence in by backing us – we are looking forward to doing good with money for the next 20 years.”

The loan from Co-op Loan Fund will be used to enable investment in IT and marketing, and to support the capital/asset ratio through a period of growth.

Ian Rothwell of Co-operative & Community Finance, which manages Co-op Loan Fund, said: “Co-op Loan Fund is a strong supporter of the credit union movement and has lent to a number of credit unions in the past, including Bristol. We are very pleased to provide finance for the next stage in the growth of this exemplary credit union.”